My Journey to Health


My journey to health found it's Genesis in December of 2018 following a doctor's appointment for a shoulder injury I sustained while managing the Christmas Tree Lot, a youth ministry fund raiser for FBC Wilmington.  Like all doctor's visits I was asked my weight.  There was no scale available so they just had to take my word for it.  I told the doctor I weighed 200 lbs.  Not being one who lived and died by the scale that was my best guess.  However, I was curious how much I actually weighed.  The next morning I got up and weighed myself on our bathroom scale.  The reading that came back was all the motivation I needed to make a change.  When I stepped on the scale that morning it showed that I weighed 210 lbs!  This represents the heaviest I have ever been.
I have never been big on New Year's resolutions.  Everyone's favorite "I want to lose weight," had never been much help to me.  However, given the time of year it seemed that resolutions were on everyone's mind.  Around this same time we had a discussion in staff meeting about a word that we would adopt for our company for 2019. I liked the idea of choosing a theme word for the year and decided I would adopt a word for myself: Health.  I knew that I wanted to lose weight, but I wanted it to be about more than just a number on a scale.  I needed to make sure that my efforts would be sustainable.

I really didn't know what I was doing.  I set a goal of losing twenty pounds.  That seemed like a reasonable number and relying on the common refrain of the resolutions seemed to be a common number as well.  I had an idea of where I was aiming.  Now, I needed a plan to get there.  For our whole marriage Becca has been a calorie counter, although not to the extreme I have become, so I knew that calories would be an important piece of the puzzle. I think my laser-focus in this area will lessen as I become more accustomed to this new lifestyle and listening to my body. I also knew that I needed to change my activity level.  I was a cross-country runner in high school and a lover of hobby sports (volleyball, ultimate Frisbee, basketball, softball, golf, etc.) I knew that I needed to be more active than my current situation.  With this very general plan in place I set off on my journey to health. 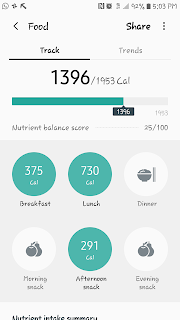 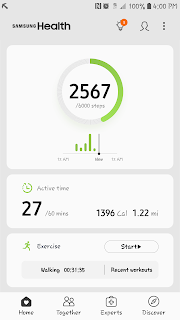 Here is my shout-out to Samsung and the Samsung Health app on my phone.  With built in pedometer, activity tracker, calorie counter (input and expenditure), and weight management features I had all the tools I needed in the palm of my hands.  This app has been one of the keys to my success!  I was able to set a weight goal and receive the recommended calorie intake based on my expected outcome.  I track all the meals and snacks I eat, record my exercises, and keep track of the amount of water I drink (still working on this one).

Within the first week of simply paying attention to what I was eating and controlling the size of the portions I lost about 10 pounds!  Some may say that is really quick.  I think it has more to do with my previous level of unhealth (poor eating decisions and lack of activity). As the saying goes, "Knowledge is power."  I am so thankful that many restaurants now have calories listed on their menus.  This has made ordering much easier to manage.  It also cued me to consider whether I should finish the meal in one sitting or eat half at the restaurant and make two meals out of it by taking the other half home.  Going into a meal pre-planning to take half home made it much easier to begin to recognize cues from my body that I actually already full half way through the meal!
I must say the first couple of weeks were the hardest.  This is probably where lot of people throw in the towel.  The dietary adjustments are too much. The scale isn't moving, You hit an early plateau and can't seem to get over the hump.  My advice is: Keep Going!  My body and mind were used to a certain amount and a certain kind of food.  I was limiting calories and steering clear of high fat items.  At first, my stomach didn't like that!  By the end of the first month I had already reached my goal of losing 20 pounds!  Because the commitment I made to myself was for improved health not just a target on the scale I set a new goal.  180 became the new target.
It was about this time that some people noticed that I was looking slimmer.  Believe me that is great motivation, especially when I had about a week where there was no change in weight despite remaining disciplined to the plan.  Some people tried to guess what kind of diet I was on or asked what I was doing.  I would always reply the same way.  "I'm not doing much; just counting calories, making better food choices and running/walking some."  When they started asking for more details I began to realize that I was implementing quite a few things at once.  Again, for me it has never been so much about a number on the scale as it is overall health.  Here is a list of what I have maintained since January:

1. Don't drink calories!  (By far my biggest sacrifice has been giving up sweet tea!)
2. Portion Control (Most American restaurant meals can easily be split with a friend or two meals for yourself.)
3. Limit fried foods (Notice I didn't say eliminate; balance is key)
4. Count your calories (Knowledge is Power and a caloric food log is eye opening)
5. Running/walking every day (I have settled in to about 4 mi/day)
6. Push ups to tone arms
7. Sit ups/crunches to tone stomach
8. Be realistic (Treat yourself when you achieve goals, recognize you won't lose everyday).
9. Weigh yourself every morning (maintain a close feedback loop)

Initially, I limited myself to around 1500 calories, shunned all sweets, and resisted late night snacking.  By the end of February I had reached my second goal of 180 pounds.  I knew I still had some work to do in my mid-section so I set a third goal of 175 pounds.  After my initial goals were met I began to relax my restrictions a bit in order find the sweet spot of maintenance.  I am now regularly eating 1900-2100 calories a day depending on my activity level for the day.  Copious amounts of chips and crackers have been replaced with fruit and more reasonable amounts of Wheat Thins and hummus as snacks.  More and more people have noticed and commented on my weight loss.

Whether these efforts will be sustainable remains to be seen.  I do know that so far my efforts have been successful!  As of this morning I have lost 40 pounds in 3 months!  I am very pleased to announce that as of this morning I am just under 170 pounds!  I guarantee I have not seen this side of 170 since high school.

Here's to your health!